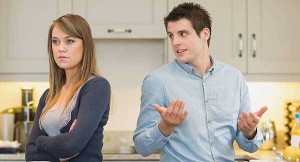 In last week’s post, we talked about solvable and perpetual problems and how important it is to deal with them effectively in specific ways. So let’s say you now know that you’re dealing with a solvable problem, what do you do? What gets in the way of being able to solve these supposedly solvable problems? If there’s a solution available, we’ve got to learn how to keep it as pure and simple as possible.

The biggest offenders in muddying the waters of conflict resolution are what Dr. Gottman calls the “Four Horsemen”. Just like the Four Horsemen of the Apocalypse signify the end of days for the world as written in the book of Revelation, these Four Horsemen signify the demise of relationships.

So, what are these four predictors? Criticism, contempt, stonewalling, and defensiveness; they all get in the way of effective problem solving. Criticism is defined as taking a complaint and making it into a personal attack. Contempt involves coming at your partner from a superior position, often mocking, belittling, or simply putting your spouse down. Stonewalling in a conflict discussion is when one of the partners looks like they have simply checked out; they no longer give any indication that they are engaged in the conversation. Even more interestingly, their heart rate is often through the roof! Finally defensiveness is a deflection of responsibility by pointing the blame back to the other partner, often by commenting on something that person lacks or has done wrong in their eyes. Dr. Gottman has gotten so good at seeing these trends in couples, that he has been able to predict with 94% accuracy which newlywed couples will divorce just by observing them for a short while in conversation.

If you notice these in your conflict discussions, you might be wondering if your relationship is over. In fact, I just said they signified the end of days for your relationship, right? Yes, but that doesn’t mean you throw in the towel. With help, dedication, and focus, you can learn to replace these behaviors with more effective and healthy ones. These new behaviors which Dr. Gottman calls the antidotes, replace the four horsemen and become a purification system for your solution.

Isn’t it hard to see your partner’s point of view when you feel you’re being put down? Aren’t you more likely to consider what they have to say if you feel respected and like they take responsibility for their part in the problem? Clearing out the mess that these four destructive behaviors leave in their wake creates a space to solve problems more efficiently.

Have you noticed criticism, contempt, defensiveness, and stonewalling in your relationship? You’ve invested a lot and investments deserve proper care and maintenance. If you would like help making solutions clearer and more easily accessible, contact me, Jemma Coleman, a licensed Gottman trained therapist. I’ll set you up with a free 30 minute consultation to get you and your partner started right away on this important work!

Come back next week to read about what we do about the other two thirds of our problems, the unsolvable ones! Perpetual problems, what’s the point in working on them anyway?